END_OF_DOCUMENT_TOKEN_TO_BE_REPLACED

Off the western tip of Efate Island, in the Western Pacific nation of Vanuatu, lies sprawling 6,000-acre Tuku Tuku Ranch. It is owned by the Trammel Crow family of Dallas and by a young American cowboy the family hired to resurrect the ranch after it had fallen into a state of neglect and disrepair.

In 1939 seventeen-year-old Lars Aursland left his home near Haugesund on Norway’s southwest coast. He was seeking adventure. Never in his wildest dreams could he have imagined how much he would find.

So the 13 people, including four small children, trapped on Suwarrow, were forced to endure one of the worst hurricanes of the century on a tiny, isolated island whose highest point was less than 14 feet above sea level.

I have spent the latter half of my life interviewing fascinating people who, themselves, were involved with the sea.  With this Oceans and Seas blog, I’m able to publish some of what are among the best stories I have come across in over thirty five years.

Read about Marcus Thompson, an American cowboy running a cattle ranch in Vanuatu (South Pacific), who battles tiger sharks in the waters surrounding his ranch.  Marcus is both their hunter and their prey.

Meet Lars Aursland, an old Norwegian sailor, who is held captive when his freighter is impounded by the Vichy French in North Africa during World War II.  Lars tries to escape, is caught and imprisoned, then escapes again, rowing and sailing across the Mediterranean to Gibraltar.  In England he joins the crew of a new destroyer.  During the Normandy Invasion his destroyer is torpedoed.  Lars is badly wounded and nearly goes down with his ship.

Learn about the thirteen people in 1942, including four little children, who were on a remote island in the South Pacific when it was hit by one of the worst hurricanes of the century.  Crashing seas bury the island, which is only a few feet above sea level.  The adults and children, unable to escape, struggle to survive.  Eventually they are rescued by the most eccentric captain and the leakiest tub ever to sail the seven seas. 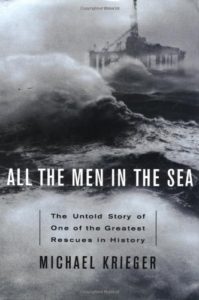 All the Men in the Sea:
The Untold Story of One of the Greatest Rescues in History 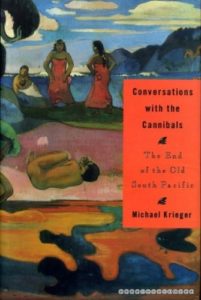 Conversations With the Cannibals: The End of the Old South Pacific

Tramp: Sagas of High Adventure in the Vanishing World of the Old Tramp Freighters