Covered by the Sea: Surviving a Hurricane – Part 36 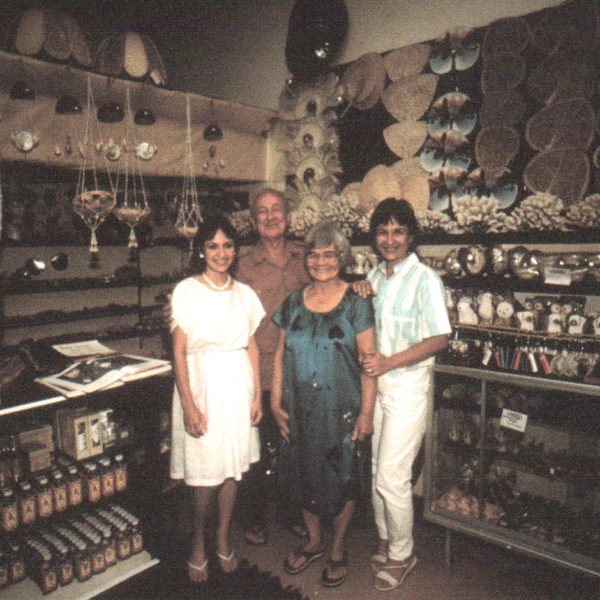 “We left Palmerston in 1943, the year following the hurricane. There was nothing to eat on the island. We were very, very hungry and there was not likely to be coconuts for another year. We decided that things were going to be pretty grim, so we came back to Rarotonga.”

“Well, when we got in, of course, Rarotonga was paradise. After being on an atoll for a couple of years without much in the way of food or flowers or anything green, to come in to Rarotonga was a real paradise. It smelled absolutely marvelous. Everywhere you went there were flowers. I always remember, your sense of smell gets very sharp if you live on an atoll a long time. You become very conscious of different smells, especially flowers and fruits. Rarotonga smelled of papaya flowers. Oh, everywhere you went there were coconuts and there were bananas. There was everything here. This was a paradise. You couldn’t believe that the world could have so much food as Rarotonga had. At that time, I don’t think Rarotonga was much different from Palmerston. There were only six cars on Rarotonga then, six old bombs that were just running. But almost every family had the remains of a buggy, and there were a lot of horses on the island. The horses, according to local legend, came out here from the French island Rurutu, when the schooners were running to and fro. And when the engines in the trucks couldn’t be kept running—no parts and no mechanics—then they were converted to horse-drawn buggies, which were very practical.”

Avarua, Rarotonga’s only town, sits on the most northern part of this circular island. To its west lies the airport. In the early 1940’s the airport was just a dirt strip with a few military planes, where an occasional flight from New Zealand might land. In between the town and the airfield was the postage-stamp port, where the coral reef had been blasted to permit a ship-sized entry somewhat sheltered from heavy seas. The business district was one block long, and that block was not even paved. On each side were a few wooden two-story buildings. The commissioner’s office was there, as was a public works building and a grocery store. A few other retail shops rounded out the main street businesses. In front of town was the ocean, and only a few miles away towered the beautiful peaks of Te Manga and Te Kau, in the center of the island. The dirt road running around the perimeter of the island was so untraveled that often a dog could have slept all day on it without being disturbed.

When the war came, the local people realized that there was no way that they could defend themselves in case of an enemy attack. From time to time a New Zealand Air Force or Navy patrol plane might land on the air field, but there were never any Allied troops stationed on the island. Nor were any large warships in the harbor for the simple reason that it was too small to hold them. But besides their fear of an enemy attack, the islanders were never much affected by the war—except for rationing.

Ron Powell describes the rationing scheme. “The New Zealand Resident Commissioner called all the people to attend a meeting at the picture show. He told them that war was on, and this was desperate, and they were fighting for their lives, and all the usual things that wars generate, and that the Cook Islands would have to help the war effort by economizing on food. The New Zealand government[1] said that, with the war effort on, they could no longer supply them with sugar and flour and rice. It had to be rationed, and they must realize that the island would only be allowed, I think, three tons of butter and ten tons of rice and two tons of sugar a year. So everyone said, ‘Well, that’s pretty grim. We’ll all tighten up our belts and we’ll all live within these rations.’ So everyone felt very morally uplifted at the wonderful effort they were going to achieve on rationing. Then one of the traders came back and sat down in his office and said, ‘Wait a minute, three tons of butter and ten tons of rice? Hey, we’ve only been using a half ton of butter and three tons of rice. Who’s going to buy all this stuff? Who’s going to pay for it?’”

“But morale was high amongst people. I don’t remember what the population was, but it wasn’t very high[2]. You knew everybody in Rarotonga. Relations between Europeans and island people were good. You were welcome everywhere. In those days people were friendly. You would see someone and you are eating, you call, you don’t know who, but when they’re passing, you call out, ‘Iar mai Kaikai’—‘Come and eat.’ But these days,” Ron laughs, “you don’t call anybody to come and eat unless you know who it is.”

“You’ve gotta look back and realize that there was practically no money on the island, and when there’s no money, of course, you’ve got such a different way of valuing things. Nobody had money in those days. Nobody wanted any money.” Well, I won’t say no one wanted it. There was always some things that a little money was handy with, but if you hadn’t got any money, it didn’t make much difference. When we came back [to Rarotonga], we had no money. There were very few stores or businesses then, and as I say, it was very hard making money, but it was pleasant, the people were good, people were generous, people shared freely. We all went fishing together. We all did community work together. And it was a delightful place to live. Nobody had any money, so nobody was any better than anyone else.”

“Well, when we came back, we found an old house, and we patched it up and moved in. No, that’s not right. We lived in Louis’s place, didn’t we?” he asks Elizabeth. “One of the family had a little house on the waterfront. And we must have lived there for… looking back, how long did we live there? A year? Because, let’s see, we came back in December, and by January we had a second hurricane in Rarotonga, in ’43. And I remember that particularly, because we were living in this old house made out of packing cases, packing boards. We had a few bits of iron for the roof, and the kitchen at the back was made with these, what we call koro sticks. It was common then. They were nice, long, straight sticks that you can build a wall with, and we used to nail them on, as the sides of the house. And we were living there when the hurricane came, and that was a very devastating hurricane. It blew everything loose in Rarotonga. A.B. Donald’s, that’s where CITC [Cook Islands Trading Co.] is, that store blew to pieces. The roof came off, and it all went up in the air and fluttered around like birds, these sheets of roofing iron. Liz was pregnant with the second, that was Joan, and she was about eight months pregnant then. And a sheet of roofing iron came down out of the sky and went right through the wall of the house and struck her in the stomach. And fortunately she survived it. When Joan was born, Joan had a dent in her head for two or three years before it sort of went down.”

“When we came back here to Rarotonga, I did a little bit of boat building and repair work for a while. Then I met a Tahitian. He was a French Tahitian and he’d got a young wife and baby, much like I had. Neither of us had any money. We got along pretty well, and we said, ‘Well, look, we can go on working for someone forever, but why don’t we try and set up our own business and be independent?’ What could we do? He’d learned to handle pearl shell and make a few things. I’d learned something about local timber and local wood. I said, ‘Why don’t we build a machine shop and see whether we can’t bring some power tools to make curios?’ Of course there wasn’t any woodworking machinery here then. We found a couple of old engines, old copper, water-cooled engines that were left around, and we managed to get those operating. From one of the engines we managed to bolt a piece of timber on the flywheel to make a pulley, and we got a bit of fish line. Then we found an old Ford car, the first one that had come and had been abandoned. We took a piston from that and put a shaft through and put some old blocks on it. Pretty soon we had a grinder going. Then we made a lathe and then a drillpress—and most all the tools we needed.”