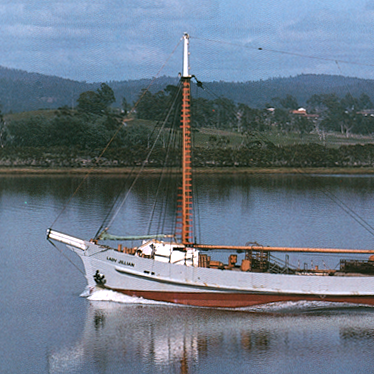 They were a tough-looking bunch: Springhead, Max, Shortfinger Sprocket Jr., and Sprocket Sr. As the ketch-rigged Lady Jillian slid alongside the wharf at Launceston, Tasmania, her crew looked as though they were ready to jump from her rigging with cutlasses. A moustached and tattooed Springhead guided the bridging chute into place as Alf Ess, the engineer, lowered it with the cargo winch. The crew positioned themselves along the chute, which ran from the Jillian’s hold, across her deck, to the livestock pens on shore. All the men were armed with electric cattle prods. 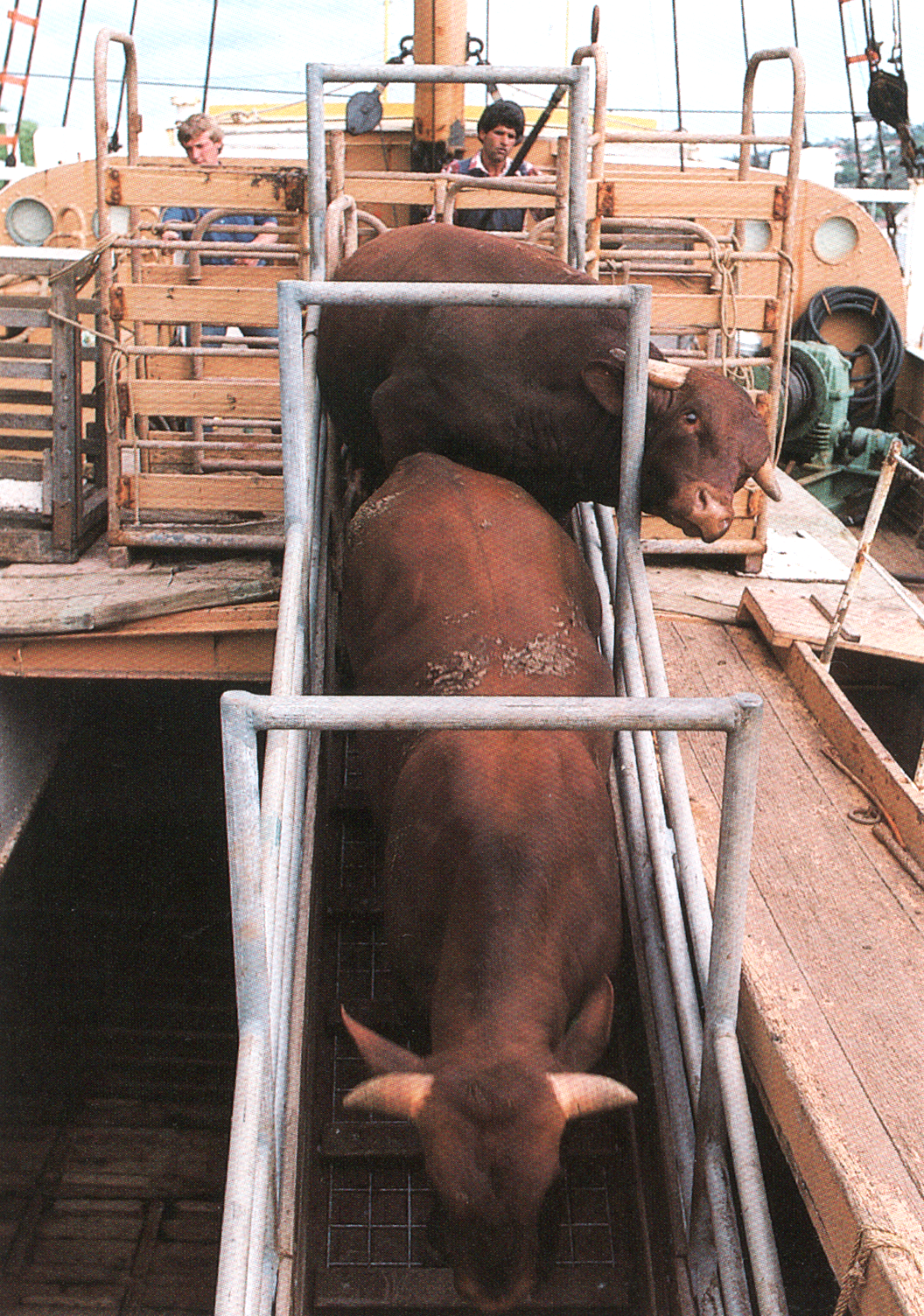 This Santa Gertrudis bull balks while being loaded for the trip to Flinders Island.

A series of bellows rang out from below deck. A full-grown cow, the first of 208 Herefords, stumbled up the chute from the hold. Wide-eyed and petrified with fear, she stopped midway up the chute. Immediately the cattle following her piled up, bellowing and trying to lift their heads into the air. A crewman stuck an electric prod into the lead cow’s flank. The shock sent the haggard animal bolting forward. Each succeeding cow received a shock that propelled it after the first Hereford. Within thirty minutes the ship was cleared of animals. The crew hosed the deck and hold with live steam, and the Jillian was ready to load again. A small but very valuable cargo was to be put on for the fifteen-hour return trip to Flinders Island: five prize-winning Santa Gertrudis bulls.

Late in the afternoon the loading of the five Santa Gertrudises began. The huge chocolate-brown bulls, however, wanted absolutely no part of the Lady Jillian. With saliva foaming, they balked at every turn in the chute until the cattle prods shocked them into moving forward. One of the bulls, confused and bewildered, tried to go over the top of the chute and succeeded only in tangling his foreleg between the rails. Stuck, the one-and-a-half-ton animal thrashed wildly in an attempt to free himself. It was a delicate moment. Jass Cheema, the closest crewman, had to react both correctly and immediately. A wrong move would cause the bull to break his trapped leg. Jass poked the prod once at the bull’s neck and the shock provoked exactly the right reaction. The bull backed away and in so doing freed himself. The men knew their work and they did it with a minimum of force.

Once the sheep have filled all available deck space, a portable pen is loaded onto the hatchcover.

Loading was completed without further incident, and with her Caterpillar 353 purring, the Jillian nosed out into the River Tamar, heading for Bass Strait and Flinders. The Jillian’s regular route takes her into the roaring forties, that area of ocean between 40° and 50° south latitude, known by sailors the world over for its fearsome winds and mountainous seas. Bisected by the fortieth parallel, Flinders is the largest of a windswept collection of islands and rocks forming the Furneaux Island Group. Lying in Bass Strait off the southeast coast of Australia, the islands are 200 miles from Melbourne and 120 miles north of Launceston. To the east there is nothing but wind and waves for 1,000 miles until you hit New Zealand.

Low-lying, with rolling hills and empty white-sand beaches, Flinders is home to 150,000 sheep, 20,000 cattle, and 1,100 tough, self-reliant friendly people. There are not many millionaires on Flinders. Aside from sheep and cattle raising, the island’s economy is dependent on a little fishing and the odd tourist. Period. The island abounds with wildlife. Cute pig-like wombats, badger-looking Tasmanian devils (the only marsupial carnivore), some red-necked wallabies, a few small Tasmanian pademelons, together with possums, the Cape Barron goose, and the burrowing muttonbird (short-tailed shearwater) all live there. Unfortunately, the islanders view their animal neighbors as pests who compete for food with the livestock, instead of as the potential tourist gold mine they are. The wallabies are used by the local fisherman for lobster bait, and the other animals are shot as a matter of course. 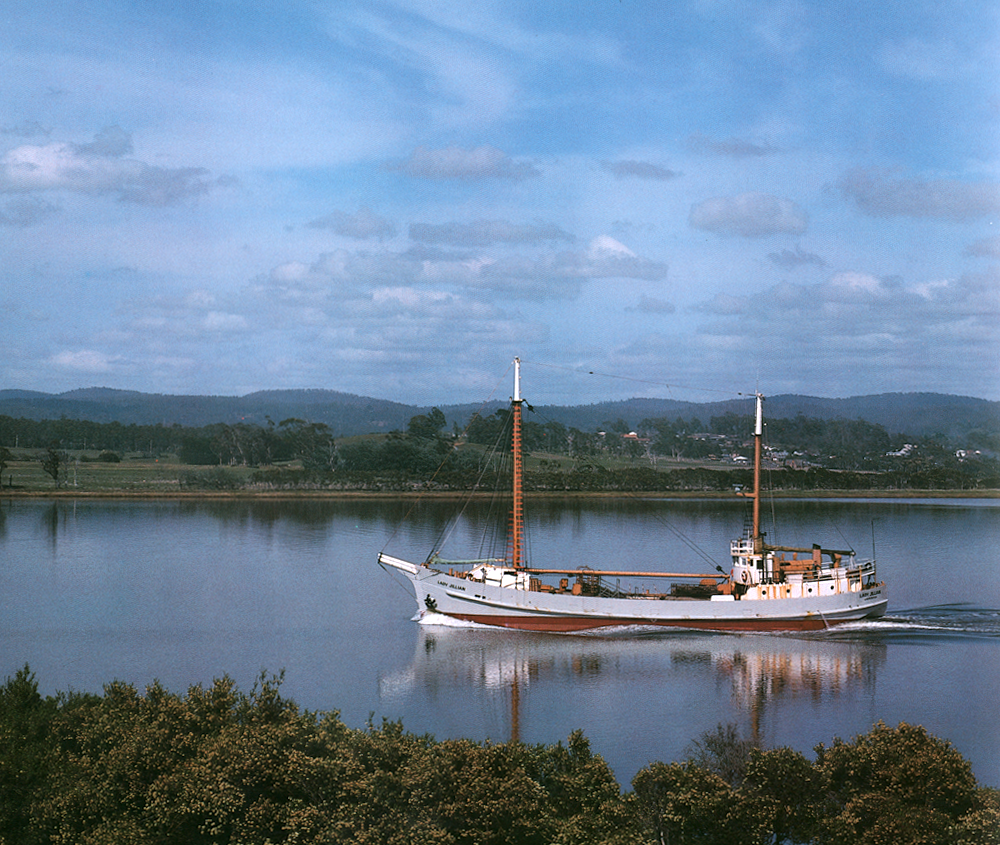 The Lady Jillian makes her way up the River Tamar toward Launceston.