Night came. The wind had picked up. It was now blowing about twenty knots and coming from the starboard quarter. Spray came over the bow of the little Jillian and some of it landed on the five unhappy bulls in the hold.

Garth Simms, the Jillian’s captain, is an Aussie sailor through and through. He is heavyset, tough, but thoughtful. He told a little about himself. “All my family were at sea: brothers, father, everybody, even before they came from the old country—Ireland—opposite the coast of Cornwall. Curly Joe, the original Simms, came out in eighteen-some-bloody-thing, 1840 or something. They started off fishing out here, hand-line fishing. Some still are fishing.”

Garth was interrupted by the radar; it quit. He stared at the blank tube for a second, flicked some switches, then tested the connections. Nothing. It was black out and visibility was poor. Garth called Alf “Fred” Ess up from the engine room and together the two men tinkered with the radar. Ess came back in with tools and some electrician’s tape, took apart a connection, and got the radar working again. 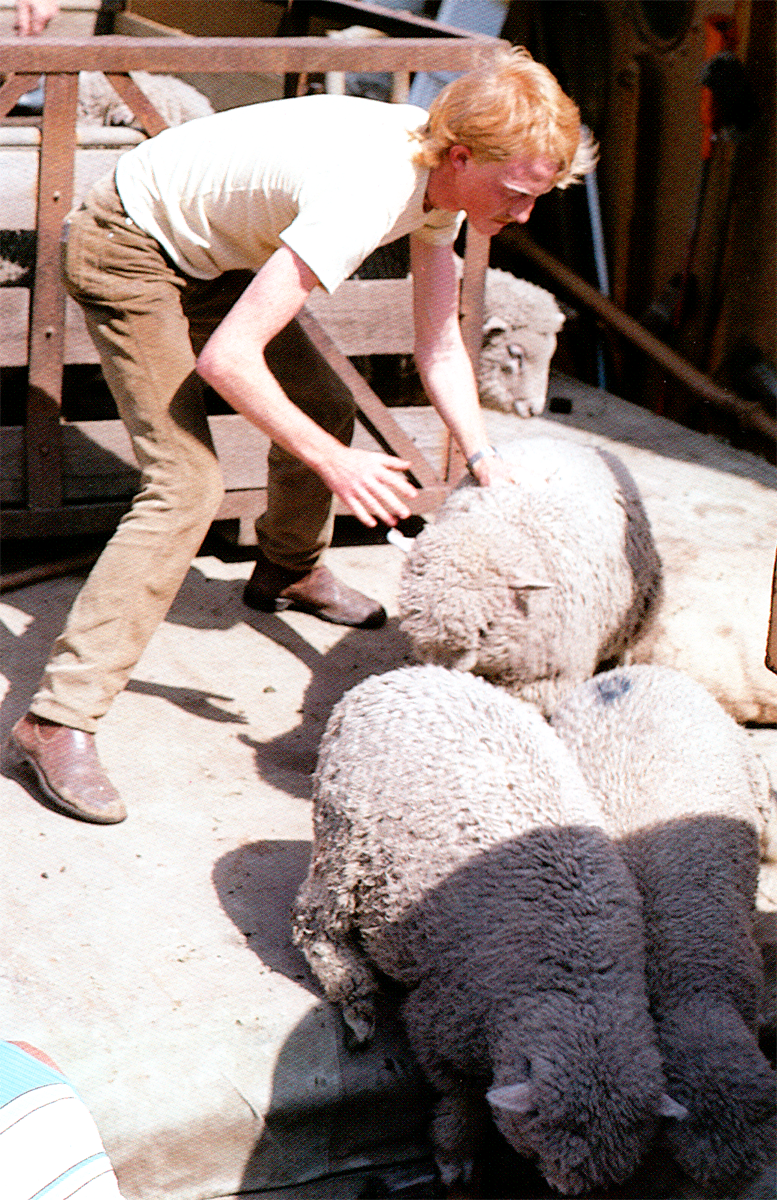 Red tries to prevent some errant woolies from escaping.

“How long we been down here, Fred?” Garth asked. “Sixty-nine? We’re in the fifteenth year—constant. Before that Fred was on the little one, the Triad, and I was master on a similar one in Adelaide, sulphuric acid run. Twelve years there, for the Crouch company. They built the Jillian. She was originally called the Jillian Crouch. Built with a flat bottom for working shallow water: steel frames, wood hull, threemaster—fore and aft schooner. This scow type used to be typical construction in south Australia in the old days. She’s good for this trade, too. At Whitmark [the western port on Flinders], when the tide’s out, we sit on the bottom for two or three hours every trip.”

Garth reflected on his work. “The cattle trade, it’s a difficult one. We’re worried about weather all the time. If it’s too rough, we can’t sail, especially with cattle. Once they go off their feet, the others fall over them and its bloody difficult getting them up again. Dangerous, too, in amongst them on a rolling ship. But we’ve lost very few due to weather. When we lose some, when they die on board, it’s usually that they’re sick when they come in. It’s in the spring and they eat that young rye grass. They’re okay until they are moved on board, then they die like flies.

“The crew on the Jillian is good with the animals,” Garth continued. “It takes real skill. You have to know exactly what to do, especially with the cattle. The sheep aren’t bad. They are small enough so that you can pick them up and move them by hand. The cattle, though, they are something else. Require thought and care in handling them. Ingenuity, too. One time we had a load of scrubbers on board—wild ones—and they got all boxed up, just refused to move up the chute. Well, old Sprocket got tired of waiting and went up to the pilothouse and blew the ship’s whistle. Those cattle went shooting off—that had them on shore in a bloody minute. Another time he tried it and they scattered everywhere.”

The captain took a sip of his tea. “Once a big steer got loose and somehow got into the galley. Well, he got stuck in there, knocking things about and making a terrible mess. It was a hell of a job getting it out because nobody could get in there with it. Finally we put a man over the side with an electric prod. He stuck his head and arms in the porthole far enough to back the steer out. But he dropped the prod. He said that he and the steer were eyeball to eyeball before he could slowly reach down and pick it up again. He was able to back the steer out, but he said that the next time a steer got into the galley, someone else could go in the porthole.”

Garth Simms’s stories went on late into the night. The next morning the Lady Jillian navigated the rocky, shoal-strewn bay at the south end of Flinders. Razorback Mountain and the Strezelecki Peaks stood up in a clear blue sky, guarding the entrance to the harbor at Lady Barron. 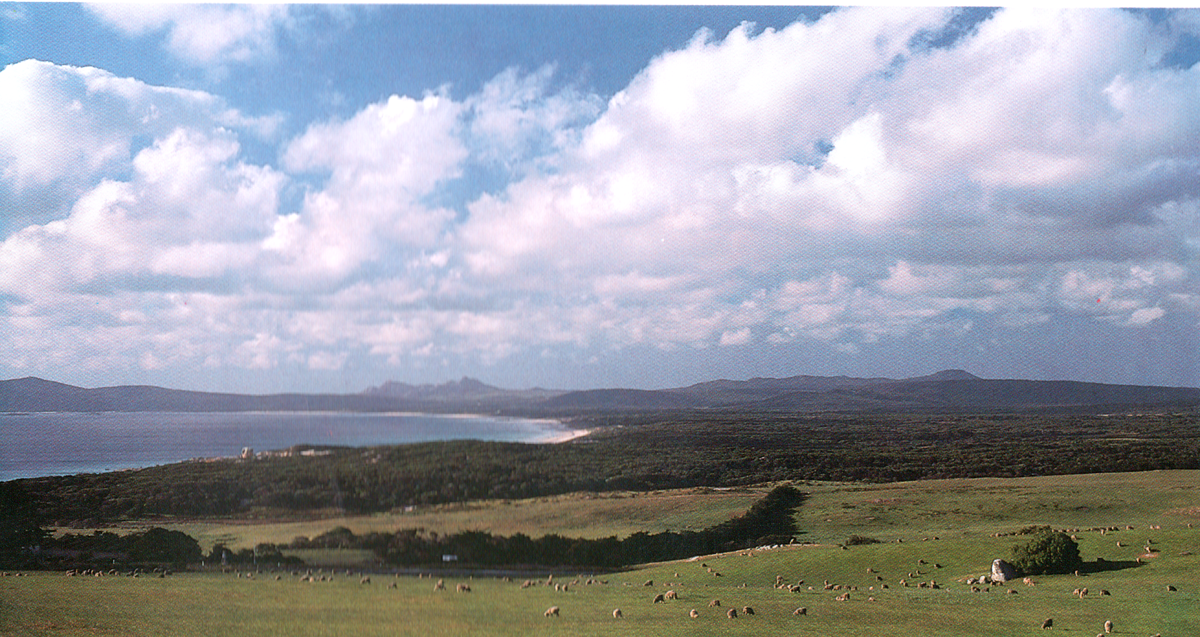 The view of Marshall Bay on Flinders Island, where there are more sheep and cattle than people.

The five Santa Gertrudis bulls were unloaded without difficulty. No doubt they were eager for the green pastures and young heifers of Flinders Island. The Lady Jillian took on a load of woolies and in an hour she was gone.

– Number and Type of Engine(s)/Cylinders/Horsepower: 1 diesel/6/425

No. of derricks and their tonnages: 1- 5 ton