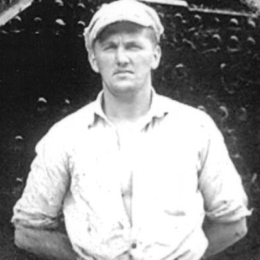 In 2003 I visited Lars Aursland, an old seaman with a fascinating story to tell. Lars lives in Haugesund, a small town in Norway’s Karmundet Sound, adjacent to the North Sea.

In 1939 seventeen-year-old Lars Aursland left his home near Haugesund on Norway’s southwest coast. He was seeking adventure. Never in his wildest dreams could he have imagined how much he would find.

Lars had started working on local tugboats when he was sixteen. A strapping six-foot blonde, he was used to hard work. His parents farmed a few acres outside the city and Lars had spent his early years going to school and digging potatoes. Now he was an ordinary seaman on the M/S Nyhorn, a Norwegian freighter chartered by the French government to carry war materials from the United States to Marseilles. They had also loaded some farm equipment in Philadelphia that was destined for Morocco and Algeria. Their final stop for cargo was New York, and while they were still there, they heard the news. Nazi Germany had just carried out a surprise attack on Oslo – so their country was at war. Young Lars listened as the older crew members debated what it would mean for them, for their families and for their country. One thing it would mean was that now they were a target for German submarines. As they crossed the Atlantic, a very worried crew kept a sharp eye out for periscopes, and extra lookouts were posted. Fortunately, they saw none and had no problems.

On June 30, the Nyhorn arrived safely in Casablanca on Morocco’s west coast. There she proceeded to discharge her farm equipment. But now where could she go? On June 14, while they were still at sea, France had fallen and a stunned world watched as the triumphant German army marched into Paris.

Some of the Nyhorn’s crew thought they should sail back to the United States or to England. In London, the Norwegian Shipping and Trade Mission was just being formed to operate all the Norwegian merchant ships that had escaped German control. Nortraship, as it would be known, would become the world’s largest shipping company, controlling more than four million gross tons of shipping and employing 25,000 Norwegian seamen. However, Nortraship would never control the Nyhorn and she would be unable to leave Morocco. The Vichy French government, loyal to Germany, had just taken control of the country which was a French protectorate. The new government interned the Nyhorn and the other allied ships still in port.

On September 10, she was placed in a French convoy along with five other Norwegian vessels, a Dutch and an English ship, and five Danish vessels. They were taken a short way down the coast and five miles up on the Sebou River. There they were anchored, their engines were disabled, and they were stripped of lifeboats and communications equipment. The ships and their crews would remain in the river if they were fortunate. Some men were not.

A few days later Lars and all the other seamen watched as a group of other ships’ officers were marched off at gunpoint to Azenumour, an internment camp at the edge of the Sahara where, with the other “enemy” citizens, some would die of malaria and dysentery, and some of starvation. Luckily, almost no one on the Nyhorn was taken.

Many of those on board talked of escape and how they might accomplish it. Some were for overpowering the Moroccan guard who sat listlessly on the deck or occasionally rambled through a half-hearted patrol of the vessel. It was decided that since they could not steal the ship – with vital engine parts in the hands of the enemy – there was no point in trying to take over the vessel. It would simply bring French retribution. Besides, the guard often fell asleep at night, so it would be a simple matter to sneak off without being noticed. By the time they were discovered missing, they could be miles away.

One night after they had been there about six months, Lars and two other young crewmen crept off the Nyhorn and stole a small fishing boat that sat nearby on the riverbank. The boat had neither oars nor sails. “Then we waited for the tide to go out,” Lars said. “That way we could drift down the river. At the river mouth, we hoped to steal a sail or oars from another boat.”

Finally, when they judged that the outgoing tide was strong enough, they put the boat in the water and began to drift downstream. They knew they would have to pass Fortress Mhedyia a few miles down the river. The fort sat high on the southern bank with a commanding view of the river mouth. The French garrison there had orders to shoot anything moving at night. Lars and the two others prayed that clouds would be covering the moon, but when they came in view of the fortress, the clouds parted. Almost immediately French machine guns opened up and their boat was hit.

Lars and the other two boys threw themselves over the side and began swimming toward the far bank. Machine gun and rifle bullets splattered the water around them. Lars struggled to swim. His clothes and shoes were dragging him down and every stroke felt like he was pulling through molasses. He was terrified and every moment waited for a bullet to come crashing into him. Still, he paddled as hard as he could and eventually saw that he was making headway. Finally he came to a marsh where he was able to wade, ducking behind cattails to keep from being seen. Soon he was joined by his companions and they ran back to the Nyhorn. “We were able to sneak back aboard without being seen,” Lars said. “We were crazy young fools – idiots.”

Lars had borrowed an old mess jacket from the steward, and since it was now covered with mud, he left it on the deck. The Vichy gendarmes who came aboard searching for the escapees discovered it the next morning. The steward, who had not been part of the escape, was put in jail for two months. Fortunately, he did not tell the authorities who had been wearing his jacket.

As time passed, the food stored onboard were consumed, and the French provided little besides some old potatoes, sad looking vegetables and, occasionally, half rotten fish. The crew constantly plotted escape. After about a year Lars and the two other young crewmen again snuck off the ship at night. This time they made their way overland to the coast. With little food and only a few bottles of water, they began walking up the coast toward Algeria, nearly three hundred miles away. Dodging enemy sentries, they walked mostly along empty beaches. Sometimes they met Moroccans, who would have been paid a bounty for capturing escapees, but the people they encountered were usually friendly or paid little attention to them. Near settlements they hid until nightfall before proceeding around village outskirts. They carried a gray blanket, and whenever they heard or saw an aircraft, they lay on the ground and covered themselves with the blanket to camouflage themselves.

Algiers was still a free state, and they thought that if they reached it they could be repatriated, possibly to Britain or to the United States. They headed inland a ways to cross the “horn” of Morocco and also to avoid the city of Tangier, then joined the beach again east of the city. After nearly two weeks of walking, they neared the Algerian border. When they approached it, the border guards looked them over with interest. But of course the guards were harmless Algerians, right? Wrong. They were Vichy French, who promptly arrested the three and sent them walking back, under surveillance of armed, horse-mounted guards, to where they had started.

The young sailors were put in prison. Day after day they each sat or stood in single-man cells so small that they hardly had room to lie down. They were fed beans and some withered green vegetables and were only allowed out in the exercise yard for twenty minutes a day. “We came out in the sunshine for twenty minutes,” Lars said. Then he whistled and made a sweeping motion – back inside. Their cells were crawling with lice, fleas, and bedbugs, and all manner of other carnivorous insects, which feasted on them until the boys thought they would go insane from the itching. Some prisoners did go insane. One poor fellow lost his mind completely and had to be dragged out of his cell every day for his twenty-minute exercise period.

Fortunately for the boys, however, their prison was so overcrowded that after a month they were released to make room for more dangerous enemies of the state. The three itching, scratching escapees were placed back aboard the Nyhorn. You would think that their incarceration would have made Lars give up further thoughts of escape. If it did, it was only for a while and it only made him plot more carefully. A year after he had been returned to the Nyhorn and twenty-two months after the ship and crew had been interned, Lars made his final bid for freedom.