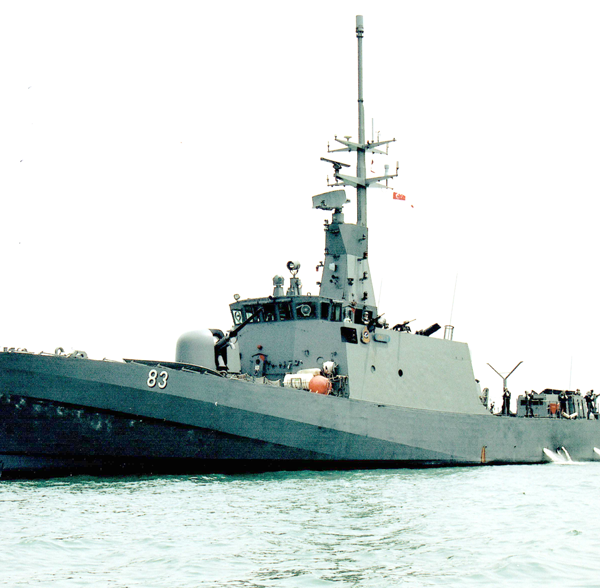 Taus Navy Base, Republic of Signapore

Slowly the RSS Unity backs out of her berth into the waterway, passing sister patrol vessels and three corvettes bristling with guns and missiles at an adjacent dock. P. J. Lau, the exec, is at the conn. “Starboard 15,” he orders Warrant Officer Dave Wong at the helm. Wong repeats the command, affirming that he has heard it and is implementing it. In each hand he operates a joy stick, a revolving toggle that controls both the direction and the force of water coming out of each of the vessel’s water jets. With just a few quick movements, he can push the Unity to full speed, bring her to instant reverse, or make her dance in circles. 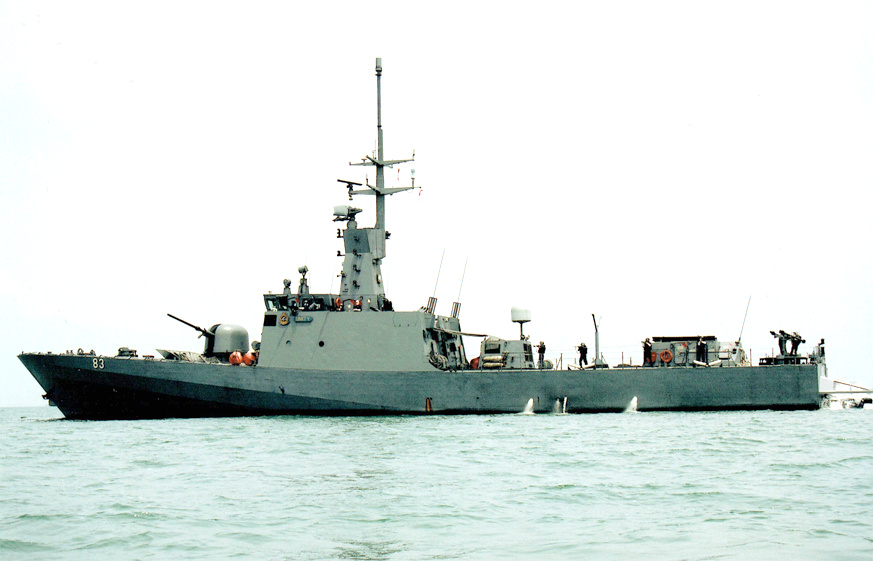 The Republic of Singapore ship, Unity, at action stations.

“Halfway starboard.” “Halfway starboard,” Wong  repeats. “Slow ahead a quarter.”  “Roger, slow ahead a quarter.”  “Come to 205,” P.J. orders. His command is repeated. “Halfway for engines.” “210 degrees.” “Roger, 210.” A female sergeant, standing watch, interjects: “Starboard, boat going from left to right.” “Roger,” P.J acknowledges. “Tanker to port,” another of the crew on watch warns, even though the 500 ft. long tanker anchored a half-mile off is unlikely to go unnoticed.

There are nine crew members on the bridge, including a talker, radar and engineering techs, watch standers, Warrant Officer Wong, who is the quartermaster (the one who actually controls the ship’s movements), the exec, and Major Tony Wong, the captain, seated in his chair, taking it all in. Everyone is intent on their jobs- total concentration and lots of action as we thread our way out into the main channel.

The Republic of Singapore Ship Unity, a 177 ft. fearless class patrol vessel, is heading out on a two-day patrol in the Singapore Strait and the South China Sea. Her main job will be to guard her country and to shepherd vessels plying its waterways and adjacent international waters. I am standing at the back of the bridge photographing, recording, and hoping for at least one gun battle with an attacking pirate vessel. If such a battle were to take place, we are well enough armed to win it. Besides the 76mm Oto Malara on the foredeck, which is capable of firing 120 rounds of high-explosive shells per minute, we have four .50-caliber (12.7mm) machine guns, two on each of wing of the bridge. A Sinbad surface-to-air missile launcher also sits aft near the transom. All in all, we are not to be trifled with, and the local pirates know it. But maybe one won’t. I am here at the invitation of the Singapore Navy to accompany one of their vessels on patrol, and I am hoping, if not for a roaring gun battle a la Captain Hornblower, at least for hot pursuit of some rogue vessel. Well, we shall see.