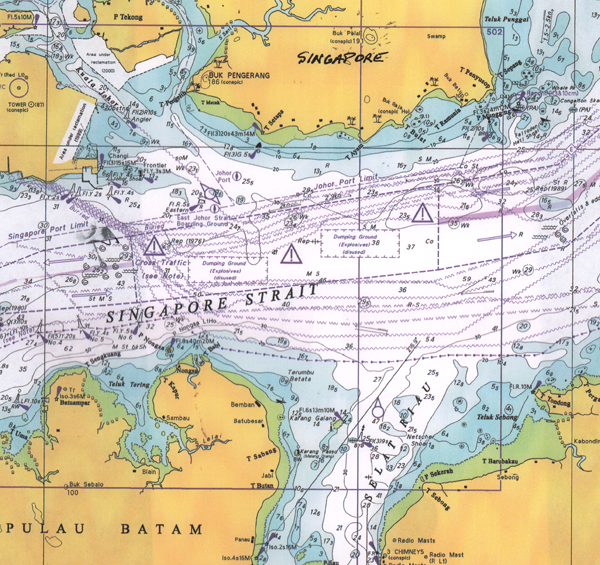 In 2002 a videotape found in an al-Qaeda hideout in Afghanistan led authorities in Singapore to arrest thirteen members of Jamaah Islamiyah, an Asian al-Qaeda affiliate, who were planning to place bombs at a bus stop and mass-transit station frequented by U.S. Navy personnel, as well as at the U.S. embassy and at buildings housing diplomatic representatives of Britain, Australia, and Israel. Twenty-one tons of ammonium nitrate was to be collected for truck bombs, of which the terrorists had already collected four tons. Evidence discovered also showed plans to bomb American warships in the narrow channel between Singapore’s northeast shore and Malaysia’s south coast. The threat of terrorism suddenly smacked peaceful Singaporeans unused to violence. 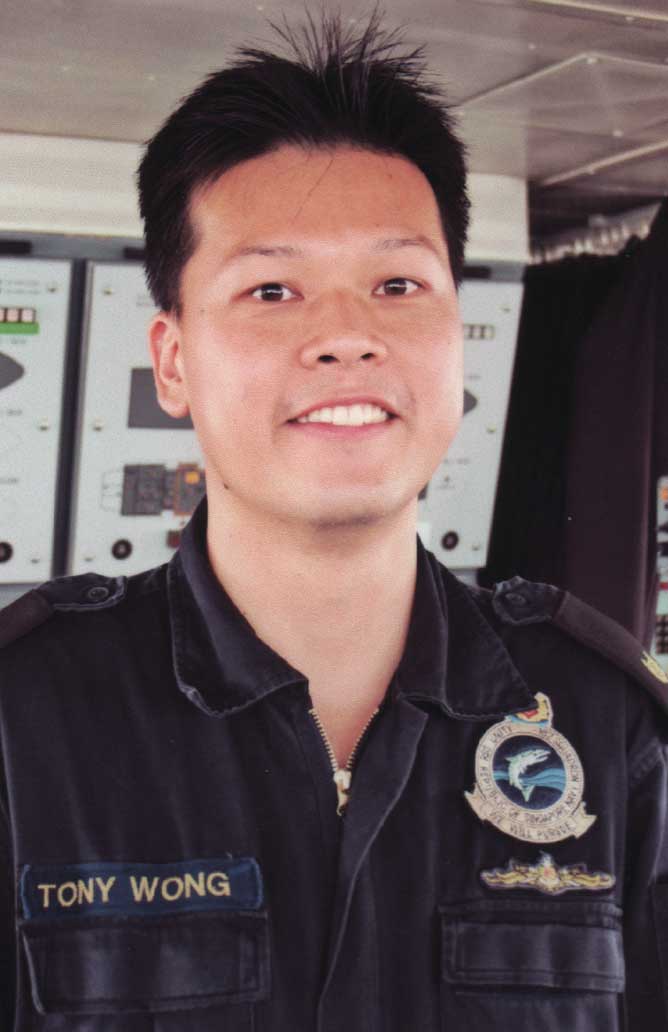 Back on the bridge, Major Wong is checking out a freighter heading West, toward us, but still a few miles off. The Combat Information Center (CIC) on the ship has forwarded ISPS (International Shipping and Port Security) information to him. The boyish captain reminds me of a fun-loving, happy-go-lucky graduate student. Actually he is a married thirty-two year old with three small daughters, and before this, his first command, he was adjutant to the commander-in-chief of the navy. He gives the impression of being a natural leader, a take-charge individual with the intelligence and ability to rise to the top in the military or in industry. He is obviously held in high regard by the senior officers.

“There is a transponder on every cargo vessel,” he tells me. “And it transmits to us the ship’s registered owner, its cargo, and all its ports of call. We know where the first port of call is and where is the last port of call. So with all this information we will know whether this guy is supposed to be here or not.”

The vessel, a large gray-hulled freighter, with a full deck load of containers, thrashes past us heading west. While Major Wong deals with other matters, I study the bridge. On the left side, two radar plotters study the screen before them. White, yellow, red and green outlines portray a bewildering mass of landforms surrounding us, as well as ships, shoals, and other navigating hazards. All together they appear as an indecipherable jungle of images, which make me want to check to see whether we are in imminent danger of running into something. We aren’t—not within a mile of a ship or within three or four miles of one of the countless Indonesian islands to the south of the channel.

To the right of the radar repeaters are a radio-telephone communications console and a pelores for taking bearings on an object in view. Farther to the right is the helm, actually a console showing a variety of propulsion and steering functions along with the gyro compass and the two joy- sticks. The captain and the officer of the watch each have a comfortable padded chair mounted on pedestals, providing fine views of everything taking place both on the bridge and in the waters before us.