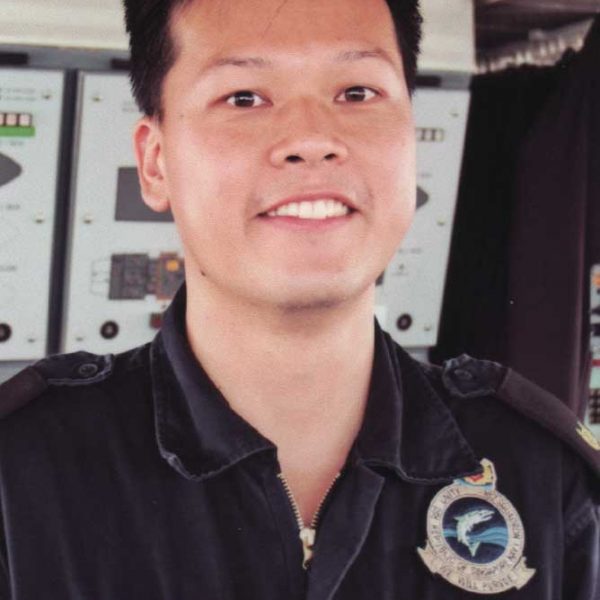 The rear of the cramped bridge space is taken up with a series of consoles in front of a bench seat. Four screens provide diagnostic information on all the ship’s systems, including engine functions. All together a half dozen people working from the bridge can control not just the ship’s movements but the weapons systems (except for the machine guns) and can determine instantly where any problem or fault exists. The last bit of space leads to a ladder going down to the main deck. The space is cramped and I am constantly moving to stay out of everyone’s way. 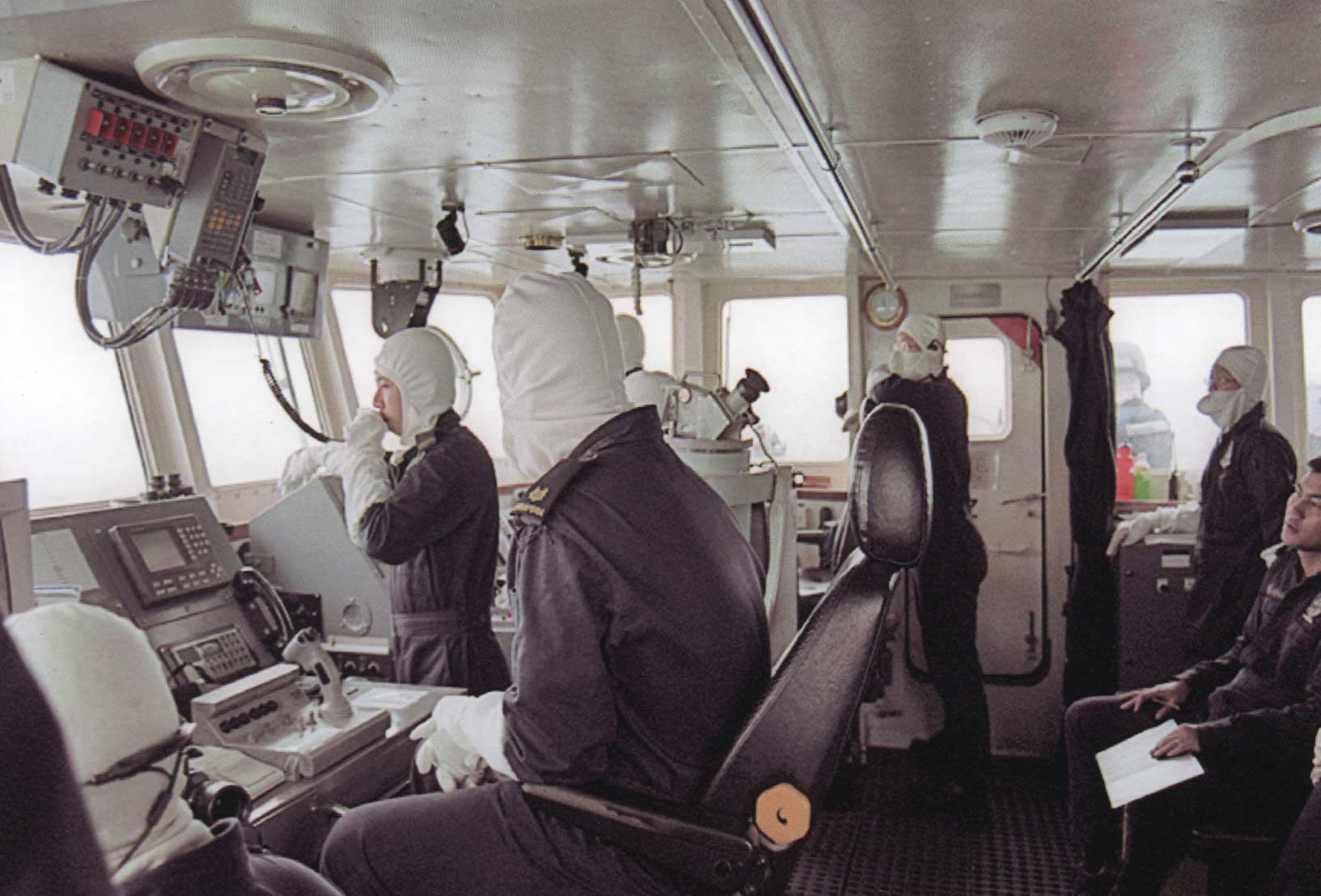 The bridge at an action stations drill. The hoods help protect against burns from enemy fire.

Master Sergeant Lum Chow Quek, the bosun, is in charge of the twenty seamen of the deck crew. He is also responsible for the maintenance and readiness of the Unity’s weapons systems. The oldest man onboard, Lum is lean and sinewed, wrinkled and weathered by a lifetime in the tropical sun. In the twenty years he has been in the navy, it has grown from a ragtag collection of patrol boats to a small state-of-the-art, computer-controlled fighting force. I ask him, since it’s obvious he was raised pre-computer, if learning the mass of computer operations necessary for his job has been a problem for him. He assures me it hasn’t, but says it required a good deal of study to master it all. I compliment him on surmounting what probably was a major hurdle for him.

We continue east thorough the southerly shipping lane. To our north is the Eastern Anchorage. A few dozen freighters and tankers, some freshly painted and modern, others dirty, grizzled, and long-used, lie quietly, spaced symmetrically a quarter mile apart. They may be awaiting a cargo, a charter, some repairs, their sale, or perhaps even their demise in the shipbreaker’s yard. On board each ship is at least a skeleton crew or watchman in case a major storm arises or they begin to drag anchor, each an improbable scenario in this sheltered anchorage. More likely, the human occupants offer at last some deterrence to an act of vandalism or piracy. Vandalism is generally not a problem. But piracy is a different story.

Ships lying in the eastern anchorage.

Directly south, only a few miles off, lies Pulau Batam, and just off our starboard bow sits its larger brother, Pulau Bintan, which looks to be considerably bigger than Singapore. Each of these jungle-and-swamp covered islands is ringed by poverty-stricken coastal villages where the local fisherman and small-boat builders barely earn enough to feed their families. Perfect incubators for sea thieves. Actually, the waters to the south have been home to pirates for centuries.

Piracy as a way of life here probably predates the introduction of Islam more than four hundred years ago. The thieves who share their ill-gotten gains with nearby families often have the support of the majority of villagers. That, together with the Indonesian navy’s inability to adequately patrol its country’s 1,000 islands and the korrupsi , or payoffs, to local police and military—a practice that is nearly endemic in Indoesia—produced a situation that allowed piracy to flourish. And flourish it does.