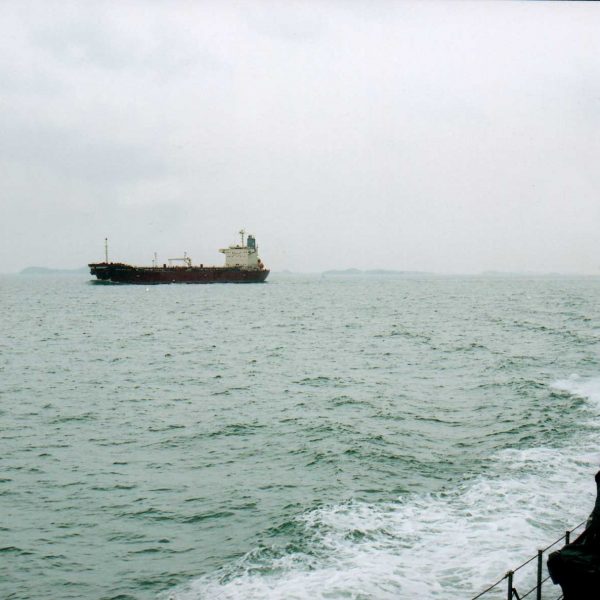 On February 9, 2003, an Indonesian tugboat, the Sing Sing Mariner, was towing a barge near Bintan Island. Unnoticed by the men on the tug, armed pirates boarded the barge and kidnapped its five-man crew, to hold them for ransom. The tug continued to sail until the following day, when a second gang of pirates hijacked both the tug and the barge. Eventually, after an international alert was posted, the tug and barge were spotted off the coast of southern Thailand, where the Thai navy intercepted them, freeing the kidnapped crew and arresting the hijackers. Often the hijacked vessels are never recovered. Their registrations are changed, names are painted out, and they may sail Southeast Asia’s backwaters for years. Sometimes they are stripped of resalable parts, untraceable barge cargoes like palm oil are resold, and both tug and barge are abandoned. If vessel owners do not pay ransom, kidnapped crewman may be murdered and tossed in the sea. 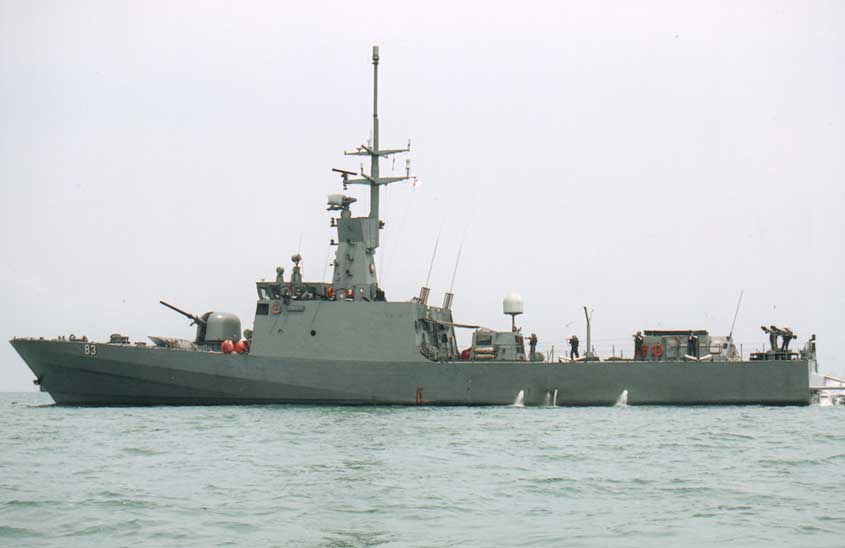 The Unity at an action stations drill.

The same year, another tug, the BW Wisdom, was lying at anchor off nearby Batam Island when it was boarded by pirates wielding cutlasses and steel pipes. Three crewmen jumped overboard. The other three were taken hostage by the pirates who hijacked the tug. The fate of the hostages is still unknown.

And it’s not just slow-moving tugs that are victimized. On November 19, 2003, in the southern shipping channel very near where we are presently sailing, pirates armed with machetes boarded the Oxalis Vanda, a small tanker, and forced the crew to open the ship’s safe, from which they stole money, then escaped.

As we continue to sail east, those on the bridge, particularly the officers and lookouts, are constantly alert for anything amiss or unusual, perhaps a vessel sailing erratically or a fishing boat with a suspiciously large crew.

Dave Wong, the warrant officer, who is the Unity’s master of all trades, along with being the quartermaster, who expertly manipulates the ship in and out of harbors and other tight quarters, is also my minder. Early on he gives me a tour of his vessel. On the main deck, just below the bridge, we go wheeling through a narrow passage flanked by cramped two-man officer’s cabins, their mess, the galley-closet, and the crew’s all-purpose room. Occupying the major remaining space amidships is the CIC, or Combat Information Center, with two rows of computer consoles. It is a second bridge. Every ship function can be monitored, the ship can be operated, and all the weapons, except machine guns, can be fired from the CIC.

Down on the deck is the engine room with its two big diesels and the massive pumps for the water jets. Then forward are the crew’s quarters, with two heads, a couple of six-person rooms, one shared by the three female crew members, and a twenty-man room taking up most of the forward deck space. Directly in the bow is the 76mm gun-loading room. It has a circular magazine with spaces for forty-eight rounds. More shells line the bulkheads in locked racks.