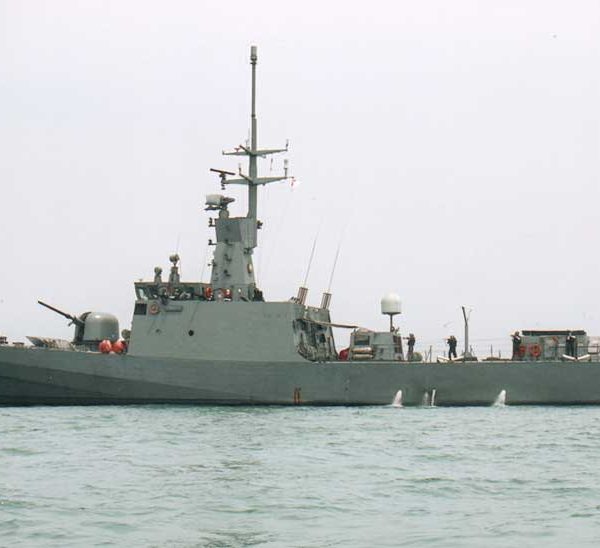 P.J. met his wife, Elaine, an associate engineer working for a semiconductor manufacturer, in an internet chat room. They have been married only a short time and as yet have no children. Both are computer buffs, and its possible P.J. may leave the navy to go into the computer field. My heart goes out to the P.J.’s of the world, the underdogs who continually have to prove themselves. Some of them have far more grit and desire to succeed than many of the natural leaders.

P.J. tells me about some of the pirates’ methods of attack. “Around Bintan,” he says, of the island directly south of our position, “there are a lot of areas without much development. They are not well lit and (at night) when the sampans come, they are darkened, no lights on them. So you can’t easily see that, for instance, here are two sampans coming toward you.”

His accounts suggests why most attacks take place at night. “Does the Indonesian navy patrol these areas?” I ask. “They do, but if you look at the Indonesian archipelago, it’s pretty big, and their navy has limited assets. So when they deploy them, sometimes they may not be at the right place at the right time. Then, they (the pirates) have lookouts for patrols and watch and wait for them to go by.”

After having lived in Singapore (though long ago) and after have seen this culture’s emphasis on intellectual ability, I have no doubt that the Singapore military will be able to counter its adversaries’ tactics. In fact, I am told they have already planned for every type of seaborne attack that might be launched against them.

Looking for a Job

Besides the navy, Singapore also has the Police Coast Guard. Well-armed police boats guard every vulnerable area around Singapore, including the huge refinery we passed on Bukum Island. P.J. says that in 1999 he was transferred to this coast guard for a ten-month tour of duty. One night he was on a police boat patrolling inshore near Sebarok Island, just inside Singapore’s territorial boundary at the narrowest point in the channel, where the eastbound and westbound shipping lanes together are less than a mile and a half wide. They got a call from a security guard who had just captured an Indonesian who had swum across the channel. “We went in and got this guy. He was hoping to come here to look for a job, for some way to make some money. These illegal immigrants know that even if they are captured and jailed, at least they have food and shelter.”

“What happens to people like that?” I ask him.

“They are thrown in jail and given maybe five strokes of the cane, then they are repatriated. And after that many of them try and come back again.”

Swimming a mile and a half across a shipping lane where every few minutes passes a 500,000-ton, 900 ft. long tanker with ten ft. high propellers that in an instant can chop you into fish chum seems like a desperate act indeed.