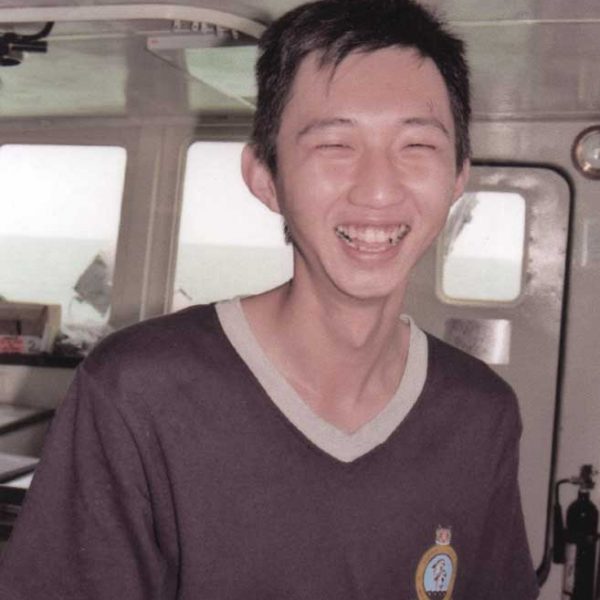 Back on the bridge. It is 1600, four in the afternoon, and a change of watch takes place. Those on duty brief their relief with pertinent information. We are approaching Horsburgh Light, a concrete tower on a shoal with a flashing beacon that separates Singapore Strait from the South China Sea to the east. We pass the light and come to 110 degrees, moving slowly out of the shipping lanes and into shallower water where, as soon as darkness falls, just a few hours off, we will begin checking fishing boats and any other craft that could be harboring pirates. Open seas begin here. The wind has picked up a little. A nice breeze, really, and a sea state that has increased to a three, from the east, hitting us abeam and causing us to roll slightly. Then as we turn back to the east, sheets of spray break over the bow. 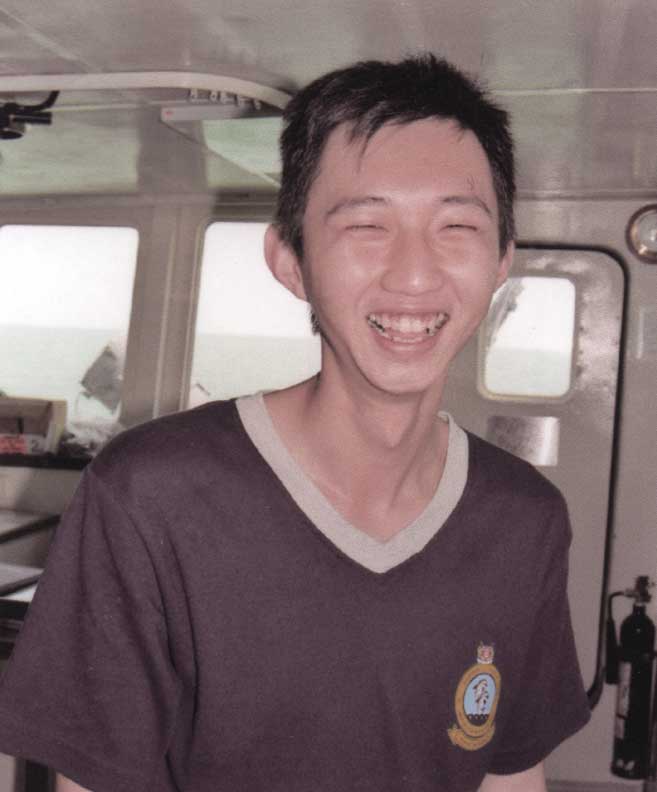 A big gray, rusty bulker passes us heading west. To the east two tankers and another freighter are headed in the same direction. And from the west, still a long way off, a couple of small tankers are moving slowly, apparently to the east. This is a very peaceful part of the patrol—and a little boring. When a delicious smell of cooking food wafts up the ladder from the galley, I follow it down to its source.

The stainless steel galley would fit on half of a ping pong table. Strapped to a high shelf, a radio blares Singapore rock, which seems to go with the movements of the galley as it pitches to and fro along with the rest of the ship. First Sergeant Chong Yong Kat, angular, with a shy, self-effacing smile, is in short pants, stirring a kettle. His assistant, Corporal Clarence Foo, chops onions…

“Do you ever get seasick?” I ask them.

“No, sir,” Clarence replies, “we have already got used to it.”

“Well, if anybody is going to get seasick, I think it would be you guys. So what are you cooking? It smells fantastic.”

“Cooking some Muslim food—Asian Muslim food. It’s a Asian delight, lah,” Chong answers, laughing. Then in an aside to Clarence, “Eh, what do you call it?”

‘The name of the dish is called, uh, mee soto,” Clarence tells me.

Chong is stirring something that looks like curry. I ask him if it is, and he says no, it’s coriander powder. “So what are you going to do with the coriander? Where is it going?”  I ask him.

“I am going to press it with the other” (Clarence has been chopping chilies, ginger, and garlic) “and make it into a paste. Then after that I will add it to the chicken. Then we fry it up, and the aroma, the fragrance, is all inside there.”

Earlier I had seen a huge commercial vat with six solid inches of red-hot chilies in the bottom. “Did all those chilies go in there?” I ask Chong.

“Some, some,” he answers, with his shy, don’t-hit-me-laugh. “The Malays call this lompok,” he adds. That translates as chili chicken.

“That looks like it’s going to be really spicy,” I tell him. “Does everyone onboard like spicy food?”

Wong, a young electrical tech, is passing the galley. He sticks his head in and adds, “Yeah, but some would like it more spicy—extra spicy.” He laughs and goes on his way.