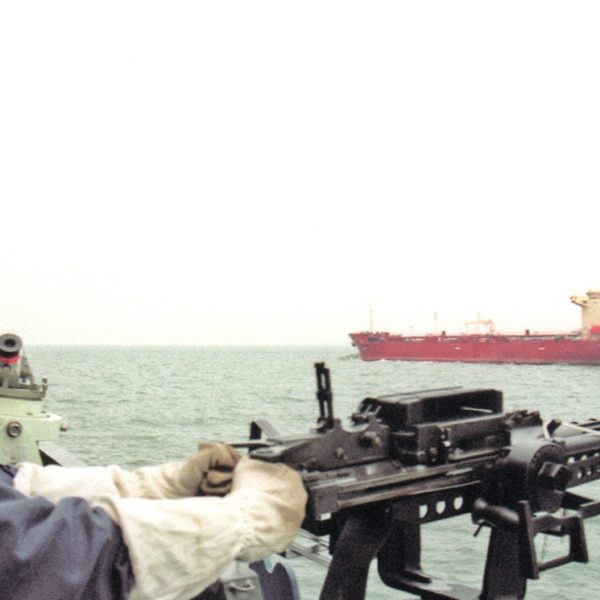 The Haydock increases speed to put more space between her and the freighter following her. The two ships may have been sailing in an unofficial convoy, a tactic that is used more and more by masters of ships traveling through heavily pirated areas at night. We slip in astern of her.

Both the starboard .50 caliber machine guns are manned.

The shipping lanes just ahead are the narrowest in all the straits, each only a little over half-mile wide. Just to the south, outside the lanes lie shoals and some very shallow water. To make matters even worse, the area has a great deal of cross-traffic, with large and small vessels entering from Singapore’s islands to the north and Indonesian islands to the south. It is an area of considerable risk—even forgetting pirates.

The Haydock has slowed to 8.7 knots and we are now just astern of her. Her white superstructure looms only a few hundred yards off. Fire hoses pour cascades of water over her transom, an action intended to prevent pirates from using one of their favorite tactics: bringing their boat nearly up against the stern of a merchant vessel and then throwing grappling hooks over her rail with knotted lines attacked. Young, agile pirates are able to scale a ship’s hull in seconds. It is usually a simple matter to make hostages of the first mariners they come across so they can have control of even a large vessel. Since merchant sailors go unarmed, with the exception of Russian and Israeli crews, there is little risk for the pirates.

I have lost track of the suspicious sampan, so I go out on the starboard bridge wing. A young sergeant mans the forward gun and Leading Gunner Sergeant Shyamlal Suresh tends the aft gun. Both men are totally focused, with the forward gunner’s weapon aimed ahead to starboard at where I imagine (but cannot) see the sampan to be. Sergeant Suresh rotates his weapon, first forward, then back, covering our starboard flank.

It suddenly occurs to me that if an attack were made on the Haydock, which seems unlikely given that we stand out like a sore thumb, even on this moonless, rainy night, pirates might not be our greatest danger. If one of the machine gunners began firing at attacking pirates and one of the .50-caliber bullets ricocheted off either the water or the attacking vessel, and if that ricochet penetrated one of those two double-hulled tanks of natural gas, we might be dancing with the angels. A rather sobering thought.

I ask Major Wong about the possibility of blowing ourselves to smithereens. He laughs and tells me no, they have strategies to prevent that from happening—but of course he won’t tell me what those are. So I ask him what would happen if the gas in one of those tanks did blow. “Maybe everything gone within two miles,” he reassures me, smiling.

We pass the sampan, which is in the shallows to starboard. Three men tend a fishing net draped over the transom. Now that we are out of the narrowest part of the channel, the Haydock speeds up again. She is doing fourteen knots and is starting to pull away from us. The order is given for us to increase speed accordingly, and slowly we begin to close. The tanker is doing nearly twenty knots now, which must be her flat-out max. We go faster until we are a thousand yards astern and remain there. Our wake rolls off to each side of us. The rain has stopped and with our speed the night air feels cool and refreshing. We have passed Changi, at the east end of Singapore Island.

Heart Goes Out P.J. met his wife, Elaine, an associate engineer working for a semiconductor manufacturer, in an internet chat room. They have been married only a short time and as yet have no children. Both are computer buffs, and its possible P.J. may leave the navy...

Limbs Fly Back on the main deck we go out, forward, next to the 76mm gun. I am instructed not to step between the anchor chains running from the chain locker through chocks to the Unity’s anchors. If accidentally the anchor windlass lock released, I might watch a few...

Ransom On February 9, 2003, an Indonesian tugboat, the Sing Sing Mariner, was towing a barge near Bintan Island. Unnoticed by the men on the tug, armed pirates boarded the barge and kidnapped its five-man crew, to hold them for ransom. The tug continued to sail until... 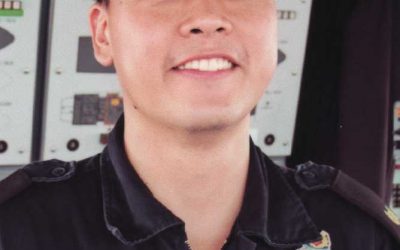 Tight Quarters The rear of the cramped bridge space is taken up with a series of consoles in front of a bench seat. Four screens provide diagnostic information on all the ship’s systems, including engine functions. All together a half dozen people working from the... 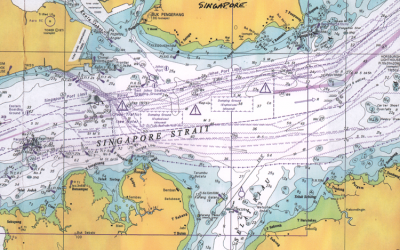 Terrorism In 2002 a videotape found in an al-Qaeda hideout in Afghanistan led authorities in Singapore to arrest thirteen members of Jamaah Islamiyah, an Asian al-Qaeda affiliate, who were planning to place bombs at a bus stop and mass-transit station frequented by... 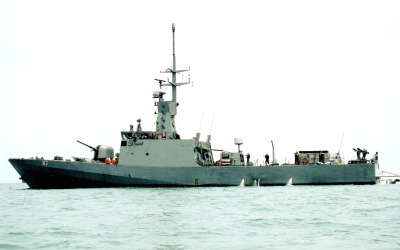 New Course The Unity enters the main shipping channel, and as we pass Raffles Light, named after Sir Thomas Stamford Raffles, who “founded” the city in 1829 for the British East India Company, she takes a new course, heading east northeast. She joins the shipping lane... 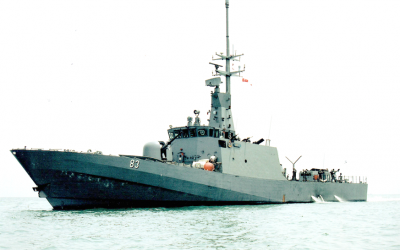 Taus Navy Base, Republic of Signapore Slowly the RSS Unity backs out of her berth into the waterway, passing sister patrol vessels and three corvettes bristling with guns and missiles at an adjacent dock. P. J. Lau, the exec, is at the conn. “Starboard 15,” he orders...

Next Entries »
← Last Chapter Next Chapter →