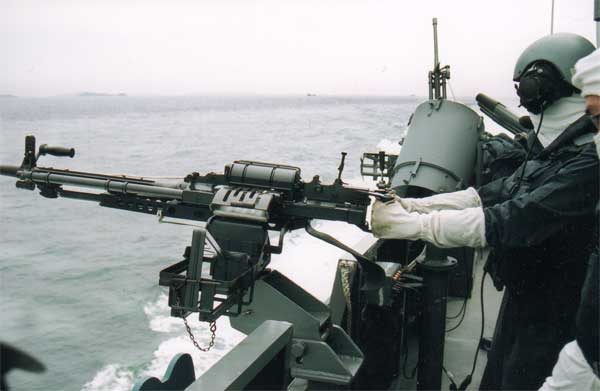 We continue at flank speed. Then the operations center orders us to break off our escort. Slowly we pull ahead of the Haydock and come to fifty degrees. At seventeen past one in the morning, orders are given for action stations to stand down, and those who are not part of the normal bridge watch fall out. I do, too, to get some badly needed sleep. 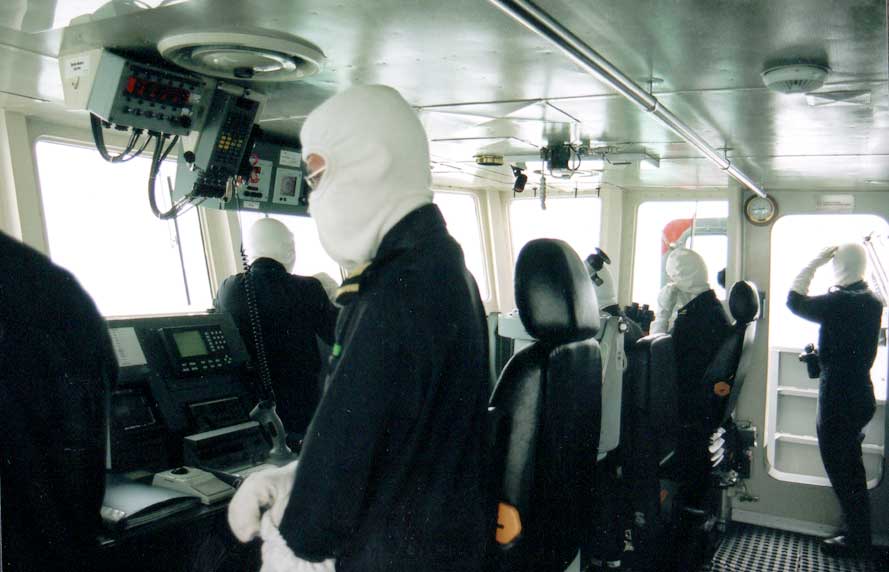 Captain Ng on the bridge

The next morning finds us idling through light chop seven miles northeast of Horsburgh Light. Breakfast is tomatoes, cucumbers, and egg salad on toast, and I gobble down my portion. After breakfast I begin talking to Captain Ng Ho Kwang, a studious-looking young officer temporarily attached to the Unity. In the Singapore navy, the captain rank is equivalent to that of the U.S. Navy lieutenant (a major is equivalent to lieutenant commander). I ask Captain Ng to pronounce his last name. It comes out like “now” spoken with the mouth closed. I try it, rather unsuccessfully. We begin talking about the movie Castaway starring Tom Hanks. It seems to me that most people watching that movie ask themselves what they would have done in similar circumstances, marooned on a tiny tropical island with almost nothing but what the island and the sea can provide. We agree that there was a lot of interesting stuff in the film. I ask what he would have done in the Hanks character’s place.

“Um, I probably will not be so bold enough to make the raft and just travel out, not knowing where it leads me to, yeah. But of course every risk is a chance. But probably I will not do that,” he laughs. “But, uh, definitely I will set up my own shelter, my base in that island. A cozy place for me to stay in.”

“What would you do to increase your chances of getting food?”

‘Well, I don’t seem to remember there are animals on the island, but what they do have is definitely fish, big vegetables, and a forested area. These are all very good, uh, resources. With all the luggage [the Fed Ex parcels that wash up after the plane crash], which is a means of resources, then I will pick out whatever I can use to make water from. From rainwater, from seawater, by evaporating means like condensation, whatever I can think of. Like the recycling of resources and, uh, fish will be a very good means of survival in the island.”

“Hanks didn’t have any fishing rod. What would you do to try and get fish?”

“Improvise, improvise. Just like in Singapore, there’s a lot of kelongs (fish traps). They pound sticks into the sea base.”

“Fish traps, very big fish traps, luring all the fish into this area.”

“Then the tide goes down.”

“Yes, and they will trap the fish inside. With observation and references to the tidal condition and, uh, movement of the fish, that probably will give me a constant supply of food.”

“I’m surprised they didn’t think of that in the movie,” I add. “All they would have to do is use rocks or pieces of coral.”

“Well, I guess it’s more the culture and background that we are brought up in. Probably in the Southeast Asia countries, that is what we’re going to use. It is more sure than to take one stick and pierce it through fish. I say that’s quite difficult!”

We both laugh, and Captain Ng excuses himself to return to his duty station.