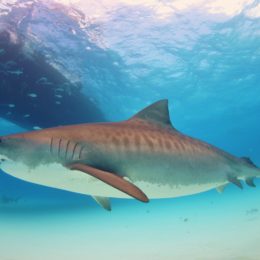 From far off, somewhere on the ranch a cow bellows. Marcus remembers, sees in his mind’s eye, the bullock calf. Though only six months old, it was large, at least five or six hundred pounds. That afternoon Marcus was sitting astride his mare, Doolittle, on the bluff, idly watching the calf below him wade out into the bay, apparently trying to get around the end of the barbed-wire fence anchored a hundred feet offshore to prevent the animals from going around it. He wondered if the calf would be able to swim around the fence. Small waves slowly swept by the calf, just wetting its belly. Suddenly it let out a horrible bellow, more like a honk. The sea around the calf suddenly was in turmoil; the water bubbled and frothed with blood. The calf struggled, desperately attempting to retain its footing, but it failed. Its knees collapsed. Kicking, but strangely no longer bellowing, it went over on its side. Marcus and Doolittle charged down the bluff to see a large tiger shark in water so shallow that its dorsal fin was completely exposed. Now, with the calf immobilized, the shark surfed in with each wave, taking another bite from the still-thrashing calf, and sliding back out again with the receding wave. Marcus galloped across the beach, lassoed the calf, and dragged the quivering body from the water. But it was too late. The heart still pumped but rivers of blood simply poured out on the sand. Gaping holes lined the hindquarters, and when Marcus rolled the animal over, the stomach was gone. The tiger shark had disappeared.

Only a few months before the calf was attacked, he was wading in the same bay one evening, spin fishing for trevally, a large reef fish. The sun was going down. There was a glare on the water. He had his lure almost like a fly on the surface. It splashed. He remembered the little splashes, little circles of water where the lure hit. One moment his world was totally at peace; the next moment it exploded.

Marcus could only guess that because of its size (over ten feet, he thinks), its aggressiveness, and the shallow water he was in, his encounter was with a tiger shark. Recounting that story, he says, “I can’t see the shark but I can see the water flowin’ over the top of its head. There is a lotta something and lots of big teeth. I jerked the lure out away from him and it landed right next to me, maybe five or six feet away. The shark turned—you could see the swirl—and it’s coming right at me. Here I am in waist-deep water and a hundred and fifty yards from shore. I’m holding my rod and reel out of water. I’m on my tippy-toes and I’m sayin’ my prayers. I keep tellin’ myself what I’ll do—how good I’ll be if it doesn’t kill me. I look down and, whoosh, it blasts by me, maybe a foot from my right side, and hits the lure again. Then it disappears. I don’t move for maybe a half-hour after it’s gone. Finally, I very slowly walk to shore.”

Are Marcus’s experiences with shallow-water shark attacks unusual? It depends on whom you listen to. Everywhere tourists go in shark territory, they hear the same reassuring slogan from resort owners and dive-shop operators: “More people are killed by lightning every year than by shark attacks.” No doubt that is true in Kansas and Switzerland. It is certainly not true in the South Pacific, although statistics are hard to come by because many of the countries do not keep records, probably because they are afraid publicity would affect their tourist industries. But the opinion of old-time residents is that in Vanuatu, the Solomon Islands, and New Guinea, three or four shark-caused fatalities occur per country per year—and perhaps there are double this number of attacks. The numbers are slightly higher in Australia and somewhat lower in the Polynesian island groups. Many attacks are provoked, however, by spear fishermen dangling bleeding fish from their belts or diving at night when tigers and great whites are most likely to be feeding inshore.

Still, many victims have been taken in the most innocent of circumstances. One day, on a scorching afternoon near the island of Malekula, an expatriate mother was dunking her baby in shallow water from the side of a small boat when a large tiger shark came out of the water and tore the lower half of the baby from her arms. A daylight attack like that might seem `unprovoked,’ but many people don’t understand a shark’s physiology and behavior. The rhythmic dunking of the baby produced vibrations and sound waves probably resembling those made by a wounded fish. These could attract sharks from over a quarter-mile, since water conducts sound almost five times as fast as air (5,003 feet per second compared with 1,159 feet per second). Sharks are equipped with more acute senses than almost any other predator. Their “inner ear” and their lateral line, a liquid-filled canal running from head to tail, allows them not only to detect sound and motion in the water, but to pinpoint its exact location. The shark’s olfactory sense is also acute. Even a small amount of blood in the water can be identified more than a mile away, as can the distinctive odor given off by a frightened fish—and, perhaps, a human. Their vision, while not as developed as their other senses, is also excellent. Clearly, sharks are supremely well adapted to their environment and to their role as carnivores.

Many victims of shark attacks in the Western Pacific have not been scuba divers, but rather swimmers, snorkelers, and bathers frolicking in shallow water. For this reason, many experienced scuba divers maintain that sharks, regardless of species, are not a problem and shouldn’t be considered dangerous. This misleading statement has cost the lives of many non-divers. Yet marine zoologists say that these enormous predators are vanishing from the waters of the Earth. Many are becoming endangered species, and without a change of attitude by the sharks’ only predator, they may soon be extinct.

This does not presently enter into Marcus’s consciousness, however. As he watches the shark circle below him, he hears the words of European friends echoing in his ears, “Marcus, someday we’re going to find a black cowboy hat and a pair of boots out there on the side of the beach.” He hopes that never happens, but he has done some dumb things. He remembers the day he and Daddy Larone, his regular shark-catching partner, rowed out to the traps in his dinghy. One of the oil drums had disappeared, but they didn’t know why. So they rowed out and saw that a thirteen- or fourteen-foot tiger was tangled in the anchor line. Daddy, a tiny half-French, half-Melanesian from New Caledonia, was looking down in the water.

“Daddy looks down,” Marcus says, “and I put my glasses in the water and looked down at the shark real good and I couldn’t see any movement at all. Daddy says, `Ah, he’s dead. Sure as hell he’s dead.’ I said, `I don’t know, Daddy, he looks kinda healthy to me.’ And he said, `Nope, nope, look at him.’ We watched, couldn’t see any gill movement, anything at all, and I said, `Okay, go down and git him.’ He said, `No, you go down and git him.’ So anyway I ended up goin’ down. I didn’t have flippers, fins, or mask on or anything. I went down and tried to untangle the line. The first time I couldn’t quite get him, and came back up for air and went back down again. The next time, I had my arm around him, right around his chest, between his head and his dorsal fin, just like you would pick up a small child. With my left hand I’m trying to untangle the anchor chain and I have the feeling that he is looking at me. I am right next to his mouth and nostrils and suddenly I can feel him—he is vigorous and he is alive. And I says, `It’s time for me to book on outta here.’ My adrenaline is pumping and my heart is out to my kneecaps, but I don’t swim. The fastest way to get up was right up the shark line because you can pull faster than you can swim. I came up out of the water and into the boat all in one motion. We looked down and by now the shark is free of the anchor chain and is swimming around. Well, after it was all over, Daddy and me had a pretty good laugh about that one. I’m not sure I would ever do that again—still, it would be a shame to waste all that meat.”