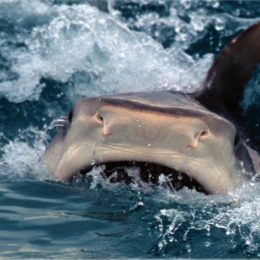 Off the western tip of Efate Island, in the Western Pacific nation of Vanuatu, lies sprawling 6,000-acre Tuku Tuku Ranch. It is owned by the Trammel Crow family of Dallas and by a young American cowboy the family hired to resurrect the ranch after it had fallen into a state of neglect and disrepair. Marcus Thompson landed on Efate with only a grin and a saddle, but he put his body and soul into returning Tuku Tuku to the prize cattle operation it once had been. Realizing its good fortune at finding a dedicated, able manager who would endure the isolation of life on a jungle ranch in remote Vanuatu, the Crow family made him a partner.

Lean, rugged Marcus lives for the outdoors. He is a gifted athlete whose experience has led him to believe that he can surmount any physical obstacle confronting him. At least he thought he could until he met the tiger sharks.

The tiger, in the Western Pacific, is easily the most feared species of shark. While the great white is rarely seen in the waters of New Guinea, the Solomons, and Vanuatu, the tiger shark often lurks close to shore. It grows to an enormous size, it is fearless, and it will attack almost anything without provocation—including man. The tiger shark has one other proclivity that affects the life of Marcus Thompson: Adult tiger sharks may take up residence in the coastal waters adjacent to a particular land form, and the waters off Tuku Tuku are one place they had decided to reside.

There is a hesitant knock, a gentle but persistent tattoo on his door. It is just 5:15 and light is beginning to spread, as resolutely, it seems, as the tapping, which has not abated.

“What?” he says, still mostly asleep.

In pidgin the response comes, barely above a whisper, but loud enough to propel him to his feet. “Yumi hukum wan sak. Hem wan bigfala.”*

Catapulting into his clothes, Marcus grabs the 12-gauge double barrel, glancing at its two bleak, sightless eyes. Then he stuffs a handful of shotgun shells into his pockets. Frederick and Thomas already have the skiff in the water; the big Mariner 75 hums quietly. Out past the reef one of the oil drums that serves as a float for the shark line is doing a surreal dance. It disappears into the water only to splash back to the surface, then skims toward the open sea before slowly rotating again back toward the reef. Anchored by a truck’s crankshaft embedded in the coral, the shark can manage only a 200-foot circle with the empty oil drum skidding along the water behind it.

The boat heads out over the reef, then immediately idles down so as not to startle the shark. The dark shadow swims in a slow circle some twenty feet beneath the surface. It is a tiger and it is very large. The fish appears to be almost as long as their eighteen-foot boat. That means more than half a ton of one of the most dangerous creatures in the world.

Among the native peoples of the Pacific the tiger shark arouses more fear than any other creature. Not only will it attack people without hesitation, it is also commonly known to attack the boats in which they are riding. Fishermen like Marcus have suddenly found themselves the prey instead of the hunter when a furious tiger, with enormous jaws agape, rams and sinks their boat. The tiger is an indiscriminate feeder, consuming anything, digestible or not, that will fit into its massive gullet. Its forty-six serrated, triangular teeth are large, hard enough to cut through a chain or a stainless steel cable, and designed to simultaneously hold and tear its prey. One of the world’s most primitive large animals, the tiger shark is a fearless killing machine with the power and speed of a locomotive.

Marcus feels himself mesmerized by the gray behemoth slowly swimming beneath him. Just behind that great blunt snout an unblinking eye focuses on his pursuer. Marcus shivers, cannot stop himself. Gently he pulls the line to ease the shark closer to the surface. At all cost he wants to avoid antagonizing this huge fish any further. Frederick and Thomas stare silently, open-mouthed. Their black knuckles turn white from clutching the rail. The shark still has far too much strength to be brought closer to the boat. The slightest shock could send him on a rampage that might easily break the inch-thick chain leader or straighten out the ten-inch hook as if it were a paper clip. So they wait in the hot morning sun. They feel divorced from everything on land, from the entire world. All that seems to exist is themselves in their frail aluminum boat and the massive shark curving through the water beneath them.