Trouble on the Saginaw River – Part 4 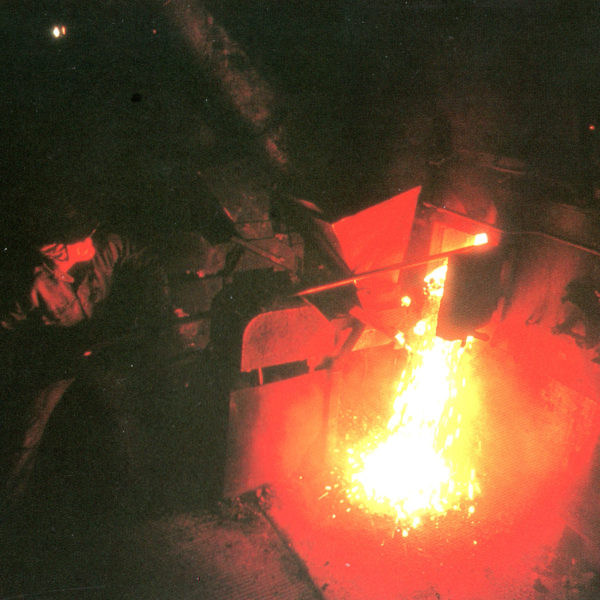 A chart of the Saginaw River shows its channel to be 200 feet wide. For a ship the size of the Crapo, though, only 100 to 150 feet of the channel’s width are usable. If a large vessel nears a channel wall, the slope of the embankment and the suction created by the ship’s propeller would produce a vacuum that in effect, pulls the vessel’s stern into the bank until she grounds. This fact is common knowledge among officers and wheelsmen. But, as the crew of the Crapo soon learns, to be aware of a challenge is one thing, but to overcome it in the few seconds before a ship grounds is something entirely different.

0126 hours. The Crapo enters the curve of the Saginaw River adjacent to the James Clement Airport. Her speed is down to five knots, which is about the slowest she can go and still maintain good rudder response. The curve itself is ninety degrees and encompasses about a mile-and-a-half of river. About half-way through the curve is a straight stretch with a fort-five-degree turn at each end. 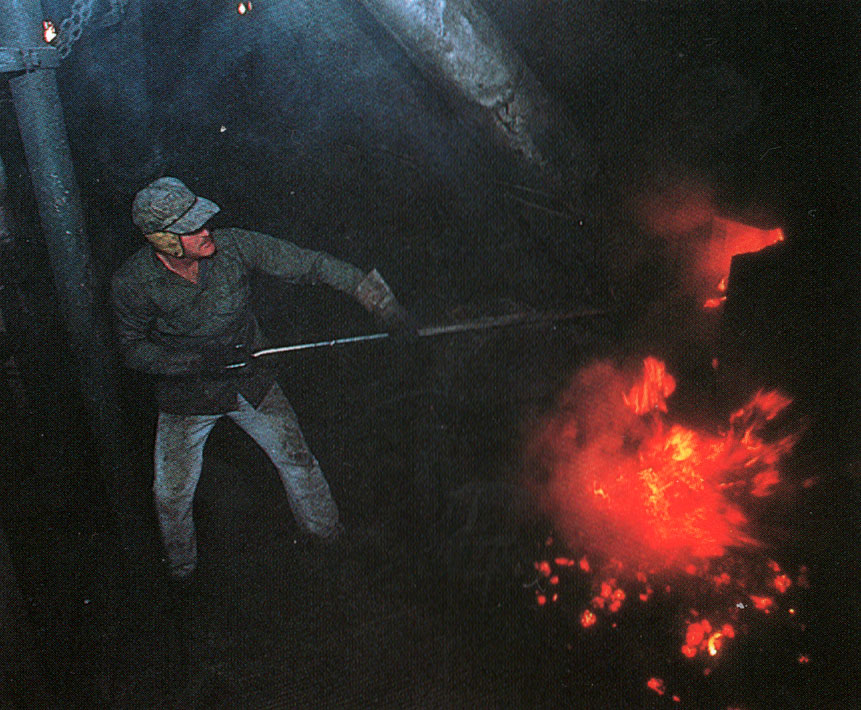 A fireman uses a hoe to rake out the burned coal from the fireboxes. The used coal, called “clinkers,” must be removed before it can plug the air passages between the grate bars and retards the furnace’s efficiency. After it’s raked onto the deck, the clinkers are extinguished with a hose. The fire room fills with ash when the fireboxes are raked. The fireman break up fused clinkers with a slice bar to keep the fire burning evenly.

Captain Ralph Knechtel lines Jim Stanley on a light at the Block Marina in hopes of keeping the Crapo on the port side of the river, since he’s well aware that the dredge, Northerly Isle, will be jutting into the starboard side of the channel at the other end of the curve. Then Knechtel orders Stanley to come to a white light on the center of the Cheboyganing Creek Bridge, which lies at a creek entrance outside the channel. As planned, the Crapo sails slowly into the straight stretch at the center of the curve. Visible finally are two white lights flanked by two red ones atop the Northerly Isle’s pilothouse. But because the dredge is sticking out into the channel at the apex of the turn ahead, the Crapo cannot cut the corner.

Still in the straight part of the curve, Knechtel advises, “Alright, Jimmy, come to the center of the billboard.” Jim quickly brings the wheel around, nearly a full turn to starboard, in order to align the bow with a lighted billboard on adjacent Highway 13.

There is a moment of hesitation, and another. Suddenly Stanley swings the wheel all the way over to starboard. “Cap, nothing’s happening,” he cries. “I’ve got the wheel hard right and she’s not answering!”

Meanwhile, the Crapo’s stern and midsection are being sucked further and further into the channel’s bank, and about 300 yards ahead is the second turn. If the Crapo does not hit the bank, she will certainly plow directly into the Cheboyganing Creek Bridge ahead. 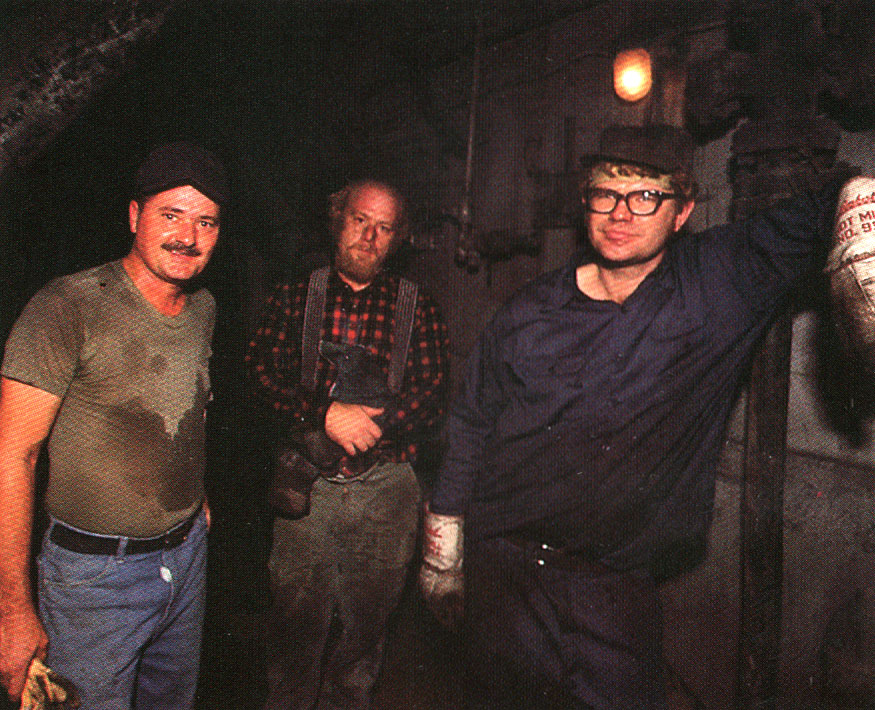 The “black gang” poses midway through their watch. Except for the addition of an automatic stoker for shoveling coal into the fireboxes, the fireman’s job has changed little in the past hundred years.

The captain moves instinctively to the engine telegraph. Without hesitation he rings “full ahead” on the telegraph and shifts the bow thruster hard left. He tells his wheelsman, “Keep the wheel hard right, Jimmy.”

Brown water boils at both ends of the Crapo and Jim Stanley is in anguish. “She’s still moving left, Cap! She’s not coming at all!”

“Marv!” the captain orders, “tell John to give us everything he’s got.”

Marv Kerr is already at the engine-room phone. “John,” he yells to the third engineer, “give us everything you’ve got! Maximum rpm’s!”

Almost immediately a maelstrom erupts aft of the Crapo’s propeller as tons of water thrash over the rudder. The ship tears itself away from the bank and cuts into the turn at speed.

Jim Stanley rapidly swings the wheel back to port as “slow ahead” rings out on the telegraph, and the Crapo flashes by the Northerly Isle with less than fifteen feet to spare. 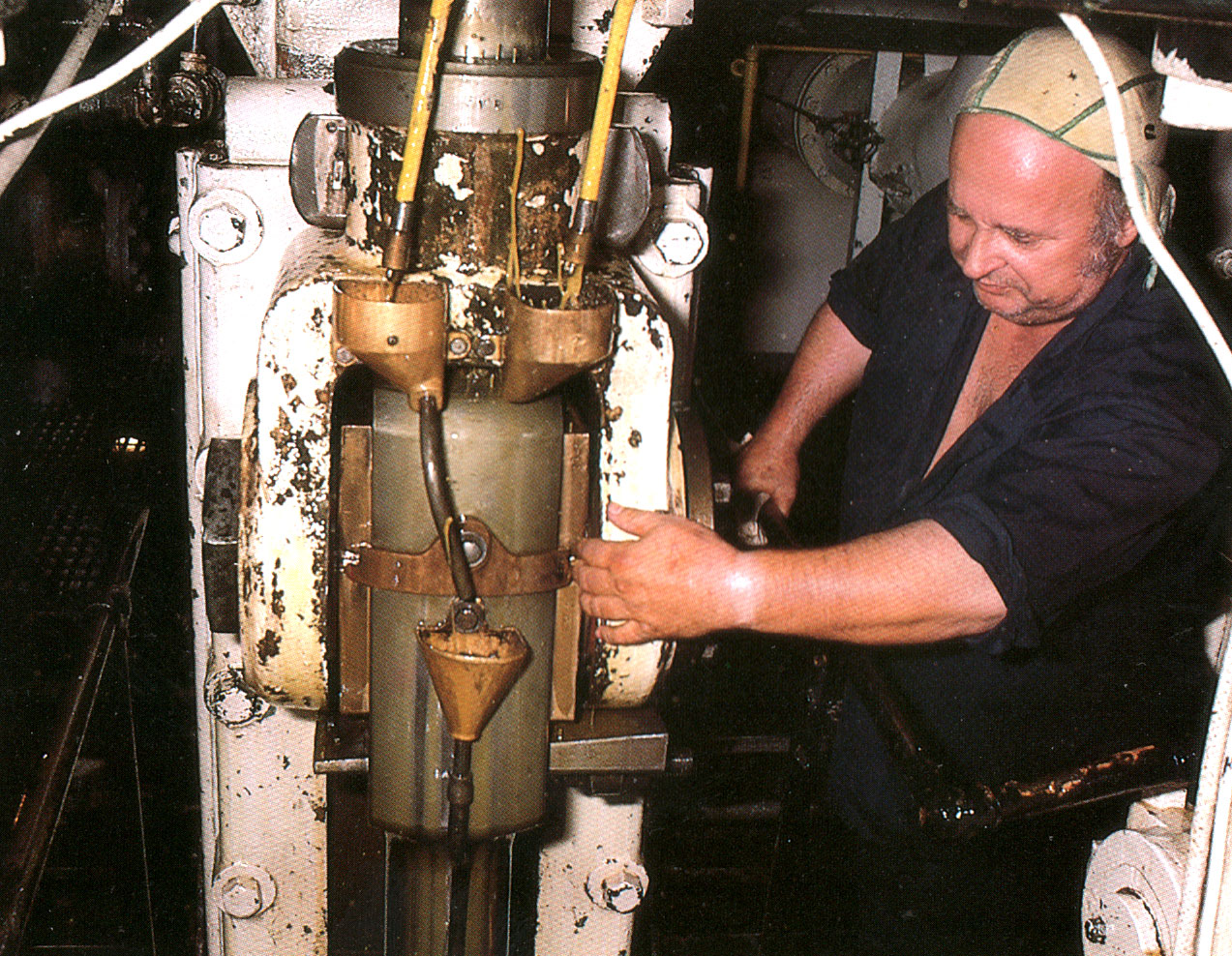 The oiler checks a crosshead bearing on the Crapo’s main engine.

Two curves up the Saginaw River and an hour and fifteen minutes later, the Crapo reaches her destination. At 0310 hours, the lines are out, the Crapo is secured alongside the dock, and a very tired Captain Knechtel rings, “finished with engine.”